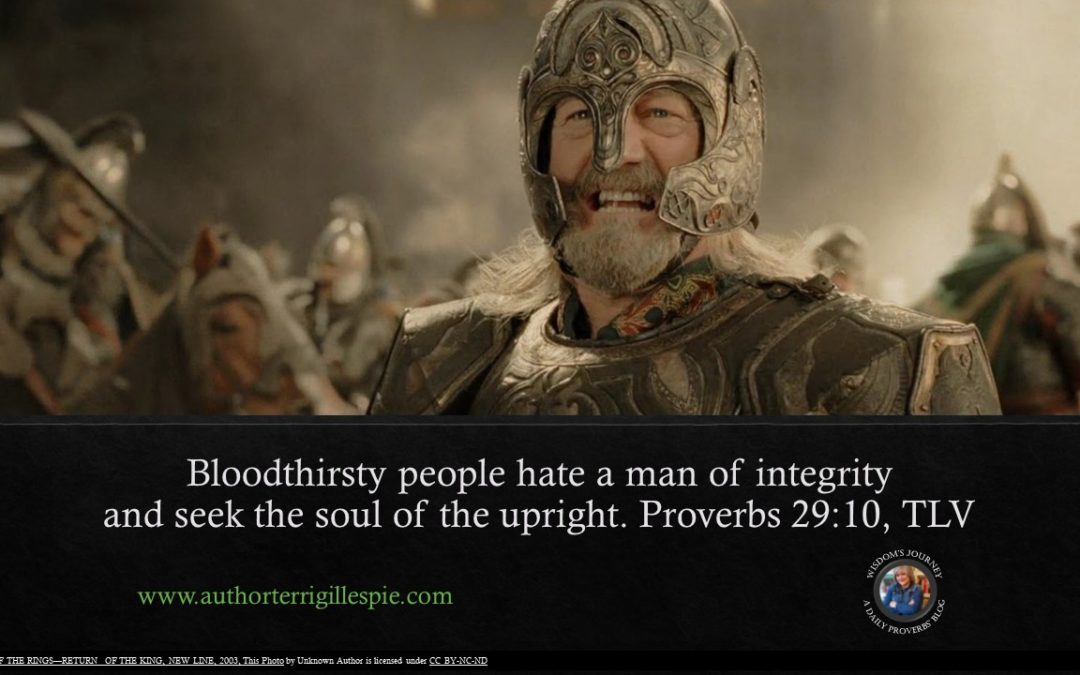 Today’s Blog: Taking Back What Was Lost

TODAY’S PROVERB: Bloodthirsty people hate a man of integrity and seek the soul of the upright. Proverbs 29:10, TLV

Our eyes are drawn to light. But, there are those who have been so long in the dark, they hate the light. And, they despise anyone who resides in its warmth.

Evil seeks any means to expand its territory — to cover it in darkness. All it needs is fear and apathy. The corrupt promote that “what’s the use” mentality, and apprehension of what the light might expose.

Apart from all that, I was thinking, we as believers tend to focus on defending what is left of our territory. We can live in a state of resignation because this is just the way of the world. But, really, shouldn’t we live in a state of determination to see GOD’s Kingdom expand?

Taking Back What Was Lost

Bob and I are fans of the Lord of the Rings series, especially the final movie, The Return of the King. Today’s proverb reminded me of the scene when the creepy Orcs have overrun one of Gondor’s cities and are about to capture the palace and finish off mankind. These creatures hate the light and must travel under cover of clouds.

Occupied with overrunning the palace, the Orcs don’t realize there are armies amassing to fight. Still, these armies know they are outnumbered and about to fight an impossible battle. Their fate may be doomed, but mankind refused to cower in fear or apathy. With all they had, they shout and blow their horns.

When the Orcs hear mankind’s battle cry, they tremble. The sun rises and blinds the enemy. Despite the initial surprise, the sheer number of Orcs nearly defeats them, but the true King of Gondor arrives with an invincible army who defeats the enemy within seconds.

The enemy was vanquished and the territory that had been lost was now in the hands of the King.

Take Back our Territory

Through living our Heavenly Father’s Word, we can take back what the enemy has stolen. Our families, our gifts, our hope, our joy. But, we must fight.

Although the enemy of our soul may seek to destroy us, no weapon formed against us will prosper (Isaiah 54:17). Because our weapons of warfare are not made of metal or chemicals or flesh, but powerful through God for the tearing down of strongholds (1 Corinthians 10:4). We just have to choose to battle.

May we fight and take back what belongs to GOD, my friends.

ARE YOU READY TO DO BATTLE TO TAKE BACK WHAT THE ENEMY STOLE FROM YOU? HAVE YOU EVER TAKEN BACK TERRITORY FROM THE ENEMY?

SOMETIMES JUST KNOWING A DEFEAT DOESN’T HAVE TO BE PERMANENT CAN GIVE US COURAGE TO TRUST THE LORD FOR VICTORY. I HOPE THIS BLOG WAS A BLESSING. IF IT WAS, PLEASE SHARE YOUR COMMENTS AND THIS BLOG WITH YOUR FRIENDS AND FAMILY. THANKS SO MUCH AND GOD BLESS.