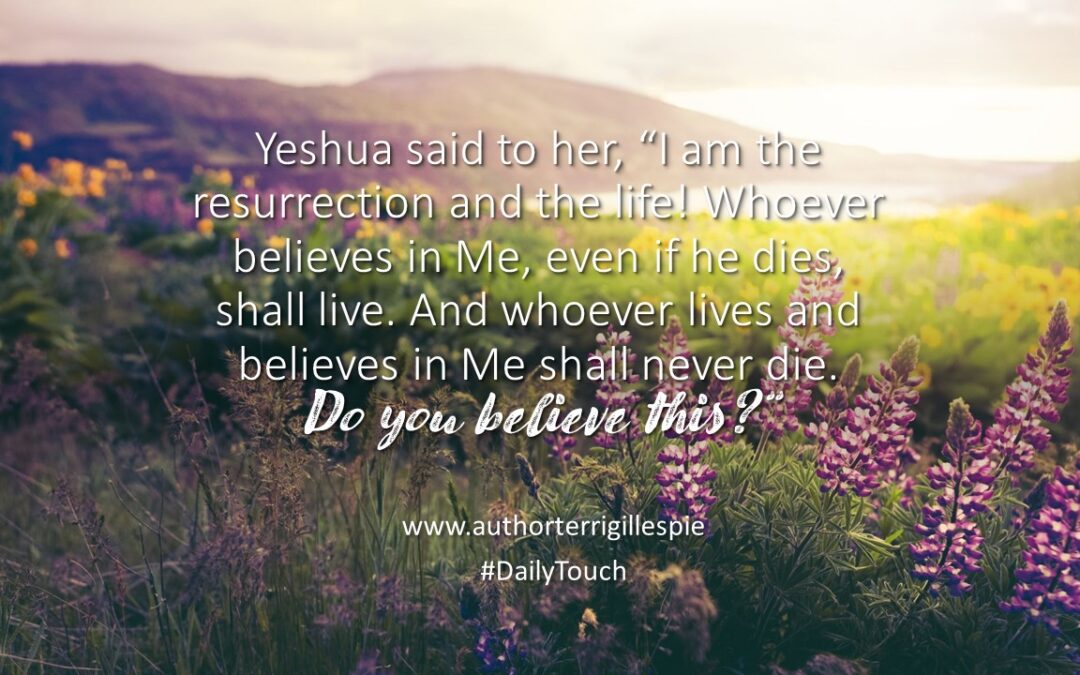 Yeshua said to her, “I am the resurrection and the life! Whoever believes in Me, even if he dies, shall live. And whoever lives and believes in Me shall never die. Do you believe this?” John 11:25-26, TLV

Jesus spoke these words to a grieving woman, Martha. She had sent for Yeshua hoping that He could do something for her dying brother, Lazarus. She and her sister Miriam (Mary) waited, hoping and praying that in the nick of time, He would appear and heal him. But He didn’t. Lazarus died.

Four days after their brother’s death, Yeshua arrives. The sisters and their friends and family are deep in mourning. It is Martha who runs to meet Him. The seed of faith within her begins to sprout with her declaration, “Master, if You had been here, my brother wouldn’t have died!  But I know, even now, that whatever You may ask of God, He will give You.” (John 11:21-22, Emphasis Mine)

“But even now . . .” Martha had hope and faith that if Jesus asked His Father, the Father would grant this miracle.

Is this faith or desperation? Why can’t it be both? How many times have we been at our lowest point of desperation and called out to God? To me, what is significant is that she left the cocoon of comfort with her sister and all those ministering to her. Martha went outside and met Jesus. When Jesus asks her if she believes, she declares, “Yes, Lord, I believe that you are the Messiah, Ben-Elohim [Son of God] who has come into the world.” How profound!

We know the rest of the story. Yeshua raises Lazarus from the grave which sends a new wave of controversy in the Jewish community.

Sometimes Martha’s moment is lost in the awesomeness of Lazarus’ resurrection. But her declaration of faith is no less awesome. One day Lazarus will die, as will his sisters, but Martha’s testimony of determined, desperate faith still shines.

Do we have the faith of Martha?

Shares
* Subscribe and Get a free sneak peak of the First Chapter of Hair Mavens—Really Bad Hair Day!