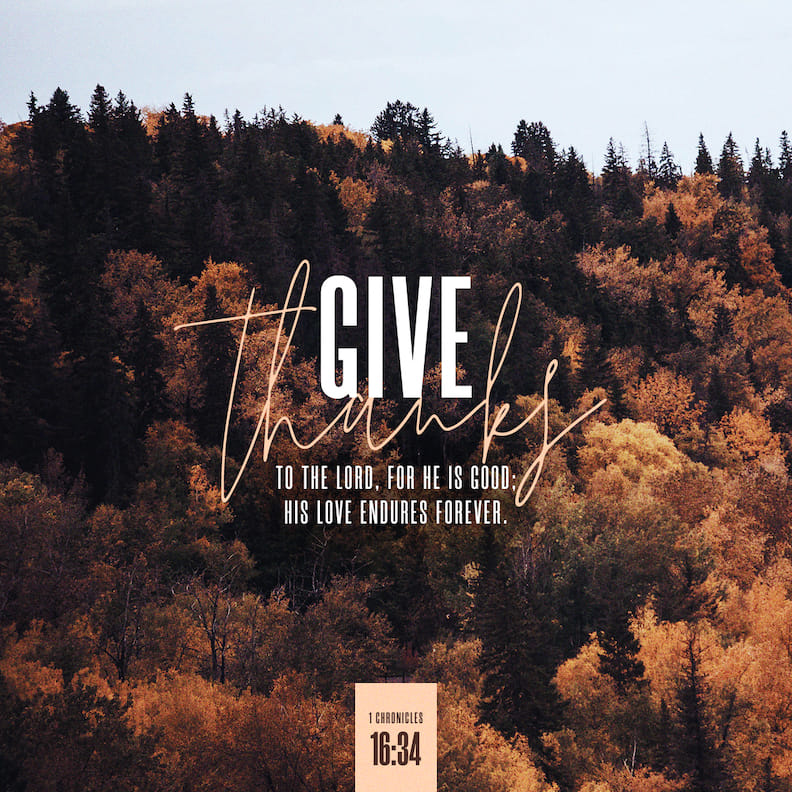 Give thanks to ADONAI [the LORD] for He is good,
for His mercy endures forever. 1 Chronicles 16:34, TLV 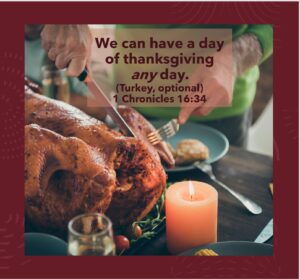 Thanksgiving at Any Time!   Finally. The Ark of the Covenant is back in its designated place in Jerusalem in the Tent of Meeting King David had made. There is barely a mention in chapter 16 of sacrifices. David begins with what is most important to him, gratitude and worship to the LORD. He appoints Levites to worship day and night with beautiful instruments and the kohanim [priests] to continually blow the shofar/trumpet before the Ark. He gives a nod to the high priest, Zadok to continue the sacrifices at the Tabernacle in Gibeon (which was a high place) for now and also include praise (vss. 37-42).

Was King David dissing the sacrificial system set up in the Torah? We might say “technically” he was. Sacrifices on the high places, even to ADONAI [the LORD] were a no-no. But, I think GOD was pleased.

After removing [Saul], He raised up David to be their king. He also testified about him and said, ‘I have found David, the son of Jesse, a man after My heart, who will do My will.’” Acts 13:22, TLV

David was not perfect, there’s plenty of evidence of that (think Bathsheba, Uriah, the first attempt at bringing in the Ark, et. al.), but he loved the LORD! He loved to worship and praise Him. To him at this auspicious occasion there was nothing more important than that. One can almost imagine the young shepherd dancing on the Judean hills.

That is the heart our Heavenly Father is looking for. Not perfect, but in love with Him. In awe of Him. All the rules took second place to relationship because in the relationship David would do what was right before GOD. When he messed up was when he strayed from that loving relationship.

In America we’ve chosen a day to give thanks, but really, we can have thanksgiving every day. How? Remember all the wonders He’s done for us, beginning with giving His Son for our atonement, then go from there. We might need a team of Levites to help us into the night. (Turkey, optional.)