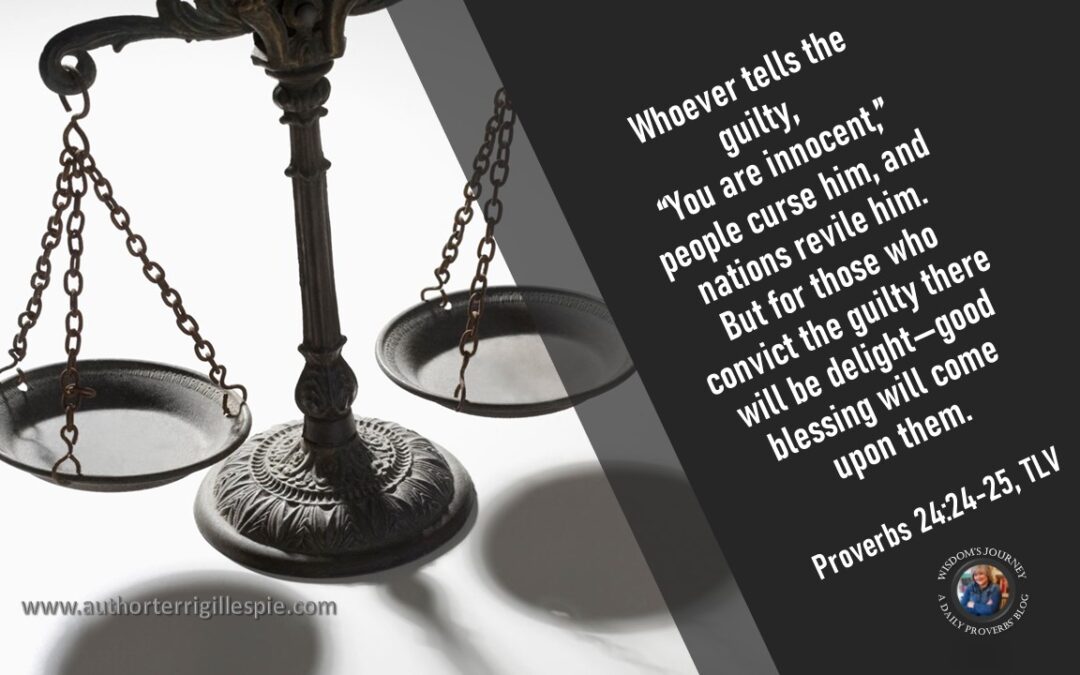 TODAY’S PROVERB: Whoever tells the guilty, “You are innocent,” people curse him and nations revile him. But for those who convict the guilty there will be delight—good blessing will come upon them. Proverbs 24:24-25, TLV

Once again, justice plays a major role in a chapter of Proverbs. It’s clear that justice affects not only the perpetrator of a crime and their victims, but will eventually affect a nation.

More than anything, our Heavenly Father wants to see redemption and restoration. He will allow the physics of His world to reveal the issues — the sins — and that can be brutal. A corrupt system destroys reputations and lives, not only the victims.

When other nations see a nation’s injustice and corruption, they will revile those leaders. Judges become criminals. Politicians are seen as corrupt.

The manifestations of injustice result in leaders from other countries to realize we are vulnerable. They will view us as weak. Because a country that doesn’t protect its own citizens is a country that is no longer trustworthy.

Ours is a great country in so many ways. We’ve weathered many controversies and decisions showing a lack of judgment. In many ways, we are incredibly blessed. Yet, we don’t show that blessing to all. We’ve been shown grace and mercy, yet we don’t always show the same.

This injustice is either out of ignorance or deliberate. Either way, it is real.

I know when our Father attempts to open my eyes about something, He is patient. However, there comes a moment when He says, “Enough. This is what your sin has caused in your life and the lives of others.” It’s seldom pretty.

Recognizing it is the first step. Repenting is next. Seeking resolution through knowledge, humility, prayer, and openness will take time, but being purposeful to watch out for injustice, prejudice, corruption, and sin will go a long way for our nation.

Likewise, revenge does not belong to us. Revenge belongs only to the Creator of the Universe and His Son. (Proverbs 8:19)

“. . . when My people, over whom My Name is called, humble themselves and pray and seek My face and turn from their evil ways, then I will hear from heaven and will forgive their sin and will heal their land.”

“I prayed to Adonai my God and confessed, saying: ‘O Lord, the great and awesome God, who keeps covenant and mercy with those who love Him and keep His mitzvot [commandments], we have sinned; we have committed iniquity; we have acted wickedly; we have rebelled; we have turned away from Your mitzvot and from Your rulings. We have not listened to Your servants the prophets, who spoke in Your name to our kings, our leaders and our fathers, and to all the people of the land . . .”

When we operate in justice and convict those who break the law, there’s a blessing. The moment we only provide justice for certain people, we corrupt what is sacred. When that happens, there’s a curse. And that curse will settle on the land until it is broken.

It’s natural for some of us to fear change, because we wonder what we might lose. But, how can we truly be happy when others live in fear and concern for their wellbeing and their children’s futures.

Sometimes I wonder if the energy we vent in complaining about our country was invested into prayer and acts of compassion and love, powerful change could happen. Action vs. grumbling will always result in breakthrough — one way or another. May we choose loving action.

May we pray for GOD’s justice to prevail, my friends.

IT’S NATURAL TO BE FEARFUL OF CHANGE, ESPECIALLY WHEN IT COMES WITH SUCH EMOTION. HOW WE AS SONS AND DAUGHTERS OF THE MOST HIGH BEHAVE IS BEING WATCHED BY OUR NATION AND THE WORLD. WHAT HAS GOD SHOWN YOU AS YOUR PART?

BECAUSE OF OUR FAMILY’S RELATIONSHIPS WITH PEOPLE OF ALL RACE AND COLOR, I AM ALWAYS STARTLED BY THEIR FEAR OF PREJUDICE. BUT, AS I’VE LEARNED, IT IS REAL. THANKS FOR READING THIS BLOG. PLEASE SHARE IF YOU AGREE. THANK YOU SO MUCH AND GOD BLESS US ALL.