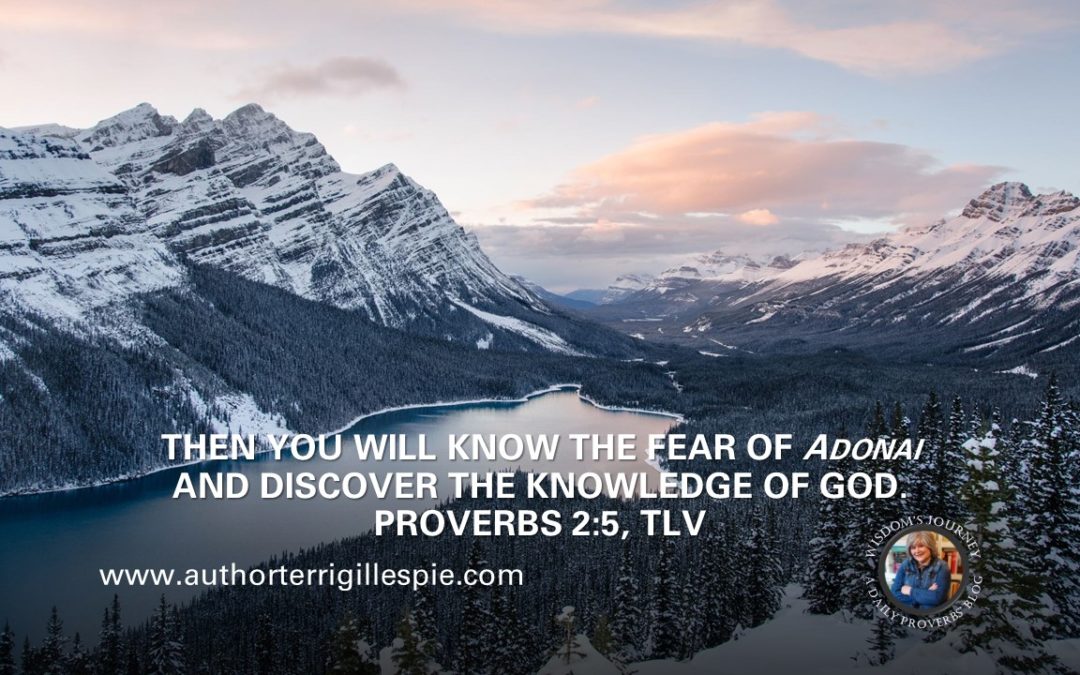 TODAY’S PROVERB: . . . then you will know the fear of Adonai and discover the knowledge of God. Proverbs 2:5, TLV

What goes through your mind when you read, “fear of the LORD?” Do you think about the flood and Noah (Genesis 7), Aaron’s sons Nadab and Abihu getting fried for offering unauthorized fire in the Temple (Leviticus 10), Ananias and Sapphira falling down dead for lying (Acts 5)? Those scary events when our loving, Heavenly Father rained down judgment? We don’t like thinking about these things . . . But, we should.

Please, my friends, stick with me, it gets better.

First, let’s begin with this sweet video. After, we’ll talk about why it’s one of the best depictions of the fear of the LORD. Ready? Let’s watch.

Go ahead and wipe away any tears.

Here’s why I believe this little cutie best depicts the fear of the LORD. The video begins with the little girl recognizing — even from a distance — that her daddy is coming home. Clearly, she’s excited. Those short legs run to greet him.

When I first saw this video, I wondered why mommy didn’t stop her from getting so close to that monster truck. But, baby girl is not intimidated. She runs around the truck to the driver’s side, scolding the doggie to get out of her way. Then the door opens. She hesitates. He exits the truck. She goes shock still and waits.

Daddy begins speaking to her, but she doesn’t move. It isn’t until he calls her to come to him that she races into his arms. Why did she hesitate — wait to hug him?

That’s the question that gave me insights into the fear of the LORD.

Baby girl loves her daddy, no doubt about that. She’s not fearful of the huge truck and took authority over the dog who obstructed her approach, but she waited for her father’s invitation — permission — to receive the lovin’ he waited to give her.

We know our Heavenly Father loves us. But, let’s remember, He’s also the Creator of the Universe. He’s holy — and we’re not. Bear in mind, more than anything He wants us in His arms for some serious snuggles. But, He’s holy.

For many years, I stood on the “deck” watching for my Father. Because He’s holy and so Big, that’s where I remained. The fear of the LORD was bigger than my understanding of His love.

Now, if Jesus pulled up, I would fly off that deck and hug Him, no hesitation. He’s holy, but it feels different. Why? Yeshua’s role and purpose was to die for my sins. Who wouldn’t love on Him.

Having said that, we need to remember why He did it. Yeshua did it so that we could also run into His Father’s arms.

That moment of hesitation from the toddler was like acknowledging how awesome her daddy was. She waited for that invitation out of respect. That’s the balance of love and awesome fear.

I spent half a day watching other toddlers and babies excited to greet their daddies. Nearly every encounter was the same. The moment dad stood before them they waited until he reached out or called to them.

There’s more to this, I’m certain. I want to dig deeper to see what else our Daddy wants to show us, because I believe there’s more. Nevertheless, I wanted us to not be frightened about having fear of the LORD.

So, when I come across these passages — and there are a lot of them — I think of that little girl. I’m confident in my Father’s love, but I’m respectful of who He is. But, He’s there arms wide open.

May we have the fear of the LORD, my friends.

WHAT WENT THROUGH YOUR MIND WHEN YOU READ PASSAGES ABOUT THE “FEAR OF THE LORD?” DID THIS BLOG CHANGE HOW YOU THOUGHT OF OUR HEAVENLY FATHER? HOW?

THANKS FOR STOPPING BY FOR THE READ. I’VE BEEN NOODLING ON THIS THEME FOR SEVERAL MONTHS, AND WILL PROBABLY NOODLE SOME MORE, SO ANY INSIGHTS YOU HAVE ARE APPRECIATED. PLEASE SHARE, IF THIS BLOG WAS A BLESSING. THANKS AGAIN AND GOD BLESS.