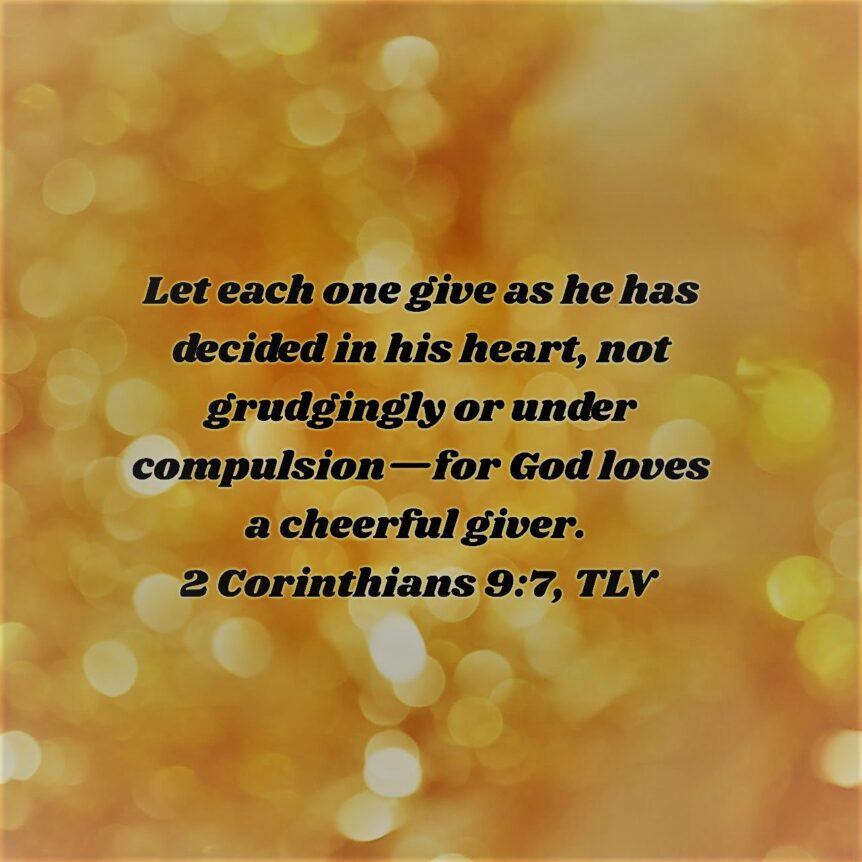 Let each one give as he has decided in his heart, not grudgingly or under compulsion—for God loves a cheerful giver. 2 Corinthians 9:7, TLV 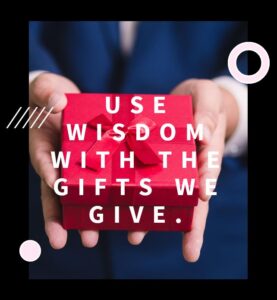 You’ve probably felt that moment. The moment where you know what to give — whether money or time or a physical item — and the peace you feel is stronger than the, “Wait! What?” This isn’t about our tithes, tithes are a given, commanded — this is about offerings and what Paul is talking about with the people of Corinth.

Let’s face it, people can manipulate us into giving money. Get us all emotional. Truth is there are a lot of needs in this world. Some of us are called to give to those organizations, but God gave us practical instructions: tithe first to the Him (where we worship), then offerings at special times (whenever we meet with Him), and finally to not forget the widows and orphans within the local believing community.

What about building funds?

Adonai spoke to Moses saying, “Tell Bnei-Yisrael [Children of Israel] to take up an offering for Me. From anyone whose heart compels him you are to take My offering. Exodus 25:1-2, TLV

Believe it or not, God does endorse building funds. When He ordered that the Tabernacle be built, He also told the Jewish people that those “whose heart compels” them to take up an offering for Him, for the Tabernacle. Now, the really cool thing is people were so excited, especially as they saw the Tabernacle take shape, they wouldn’t stop giving. So, did Moses simply amasses the extra gold, silver, jewels, spun wool, etc.?

Then all the skilled men who were doing all the work of the Sanctuary came, one by one from the work he was doing, and said to Moses, “The people are bringing much more than enough for the work of this construction that Adonai has commanded to be done.” Exodus 36:4-5, TLV [Emphasis Mine]

The enthusiasm was genuine. The men and women were giving every day, but because it was too much, the craftsmen were honest and went to Moses.

So Moses gave an order, and they proclaimed it throughout the camp saying, “Let neither man nor woman make anything else as an offering for the Sanctuary.” So the people were restrained from bringing more. For the work material they had was sufficient for all the work, with much left over. Exodus 36:6-7, TLV [Emphasis Mine]

One doesn’t hear that too often, do they? A cheerful giver doesn’t mean we give unwisely. Once again, giving requires wisdom, but more than that. Because wisdom also includes discernment — hearing from the Holy Spirit.

Bob and I have a process about special offerings. As we pray — or get a “feeling” — about what to give we ask each other what amount we “heard.” It is rare we get a different amount. And for the most part, really 99.9% of the time, I defer to whatever he heard. But that .1% of the time when I feel strongly, he listens and prays again to be sure I’m hearing properly. Only then will he change his mind.

Wisdom, knowledge, discernment, and understanding all play a role in our giving outside our tithe. If we struggle with giving too much or not giving as the Holy Spirit leads, then seek counsel from others. Others who have shown a life of wisdom, especially as it pertains to finances.

Did I Take the Cheerful From the Giving?

If I’ve taken the cheerful from your giving, please forgive me. There are so many “voices” out there asking for money. I get several “starving children” asks a day on social media alone. Some of them may be legitimate, but unless the LORD shows me otherwise, our family’s offerings and gifts need to go to our congregation and community. Guilt is not the same as discernment or the Holy Spirit’s leading.

When we are wise, GOD can take those resources and make them do miraculous things. Even loaves and fishes miracles.