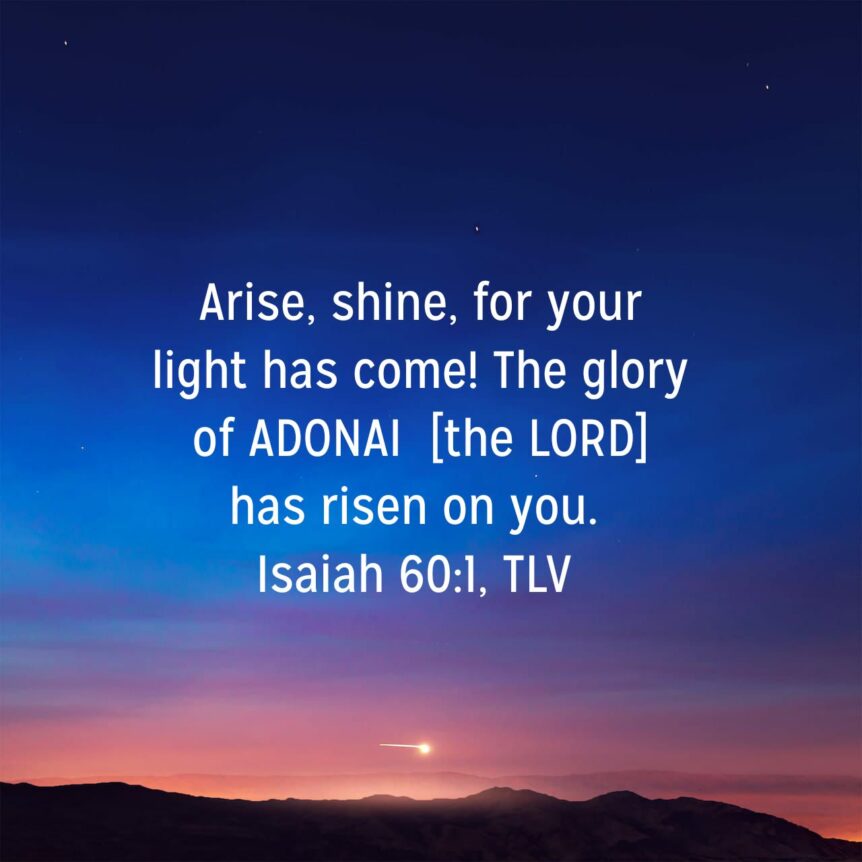 Arise, shine, for your light has come!
The glory of ADONAI [the LORD] has risen on you. Isaiah 60:1, TLV 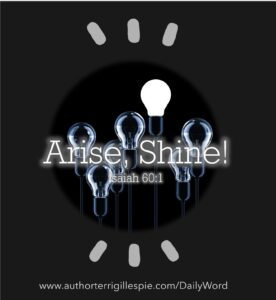 Arise! Shine!  Today’s verse leads us into one of the most profound chapter of prophesies. Some have come to be, others are still to come — which is the way of prophesies until the end of time.

Nations will come to your light,
kings to the brilliance of your rising. (vs. 3, TLV)

Here is another prophesy about the Gentiles coming to faith. We know they will be drawn by the light of the followers of Jesus — the disciples throughout the centuries until the people who sowed into us. Then, hopefully, has continued with us shining our light as followers of our Savior.

For behold, darkness covers the earth,
and deep darkness the peoples.
But ADONAI [the LORD] will arise upon you,
and His glory will appear over you. (vs. 2, TLV)

We know that darkness has covered the earth. Are we searching for the light, or is the Light already in us? Too often, I think, we want our Father to dive in and destroy the darkness. What if He has already equipped us to battle for our territory.

Rather than complaining and pointing fingers at the “culprits,” why not battle along with the Heavenly Hosts. Do our part and they will do theirs. How? With the heavenly equipment of Ephesians 6, yes, but more than that! Arise and shine! The glory of the LORD has risen upon us!

Blind the enemy of our souls — all souls with the Light of the LORD. If the enemy is blinded, then the poor souls trapped by the enemy can be drawn to our Father’s Light — His Son.

Yes, we’ll need to be vigilant. Wearing our armor because, well, that’s just good sense. But, my friends, the glory of the LORD has risen upon us! Shine!