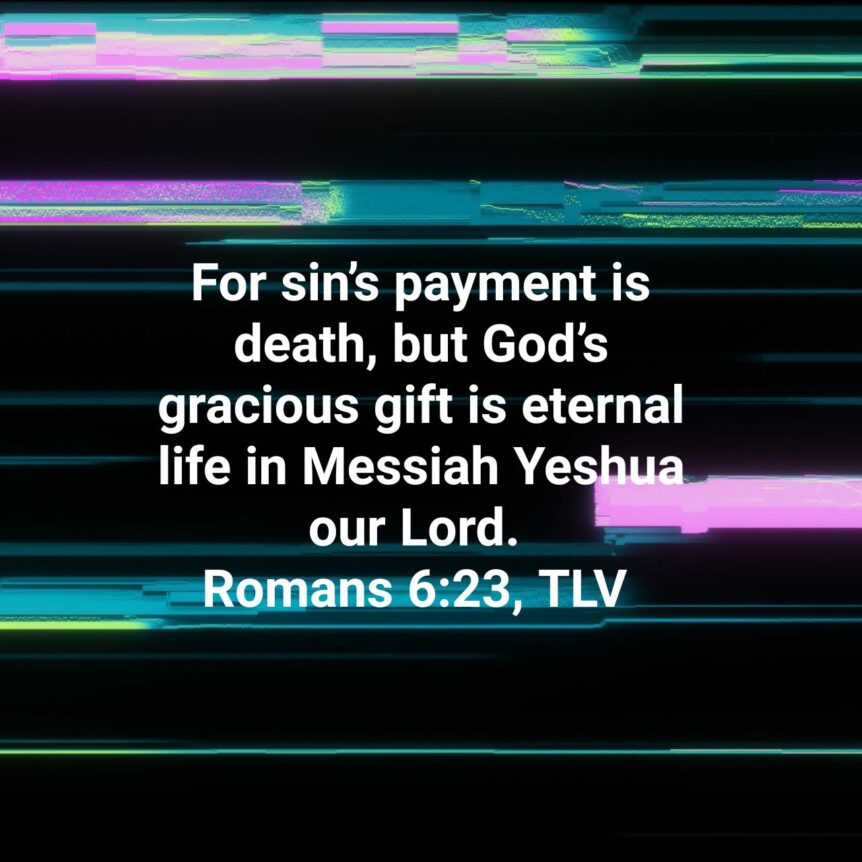 For sin’s payment is death, but God’s gracious gift is eternal life in Messiah Yeshua our Lord. Romans 6:23, TLV 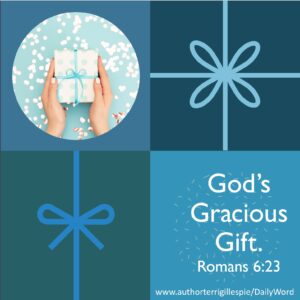 God’s Gracious Gift.  Believe it or not, this chapter in Romans has some controversy — or I should say — controversy concerning the understanding of these 23 verses. Today’s verse is straight forward, and really resolves the controversy. The controversy? Law vs. Grace. Typically, when confronting an issue of obedience — as in not being obedient — the response is, “I’m not under the Law — I’m under Grace.”

What then? Shall we sin because we are not under law but under grace? May it never be! (vs. 15, TLV)

Once again, this is all about relationship with our Heavenly Father. It’s about us being a work in progress (sanctification), all the while no longer being under the penalty of sin, which is death because of the atonement of His Son (justification). In fact, the Torah — or Law with a capital L — is still relevant in a redeemed child of God’s life.

Do we then nullify the Torah [Law] through faithfulness? May it never be! On the contrary, we uphold the Torah. (Romans 3:31, TLV)

Why did God send His Son to suffer the indignities of life here on earth, then die in excruciating pain on the cross? Yeshua says in John 3:16 that His Father loved us so much, that He gave us a chance to believe and be rescued from sin’s condemnation.

The one who believes in Him is not condemned; but whoever does not believe has been condemned already, because he has not put his trust in the name of the one and only Ben-Elohim [Son of GOD]. (John 3:18, TLV, emphasis mine)

So, how is this all about relationship? One of the most touching, revealing prophesies about our Heavenly Father is in Jeremiah — it is the New Covenant.

“But this is the covenant I will make with the house of Israel after those days”
—it is a declaration of ADONAI [the LORD]—
“I will put My Torah within them.
Yes, I will write it on their heart.
I will be their God
and they will be My people.” (Jeremiah 31:32, TLV, emphasis mine)

Our Father ultimately doesn’t want us to follow rules and regulations so He will love us more. It’s the opposite. Because of His gift of grace, He longs for us to love Him so much we want to adhere to His Law — by loving choice.

I don’t know about you, even though I love Him so much, I mess up a lot when it comes to that. If you’re like me, then you’re not alone. Here’s what the apostle Paul cried out:

That’s the beauty of grace and mercy. Our Father knows we’re going to mess up, sin, be disobedient. But, if we’re remorseful, repentant, and seek to change, He’ll forgive, heal, and restore — even if there are earthly repercussions.

We don’t want to cheapen GOD’s grace with purposeful ignorance. Instead, we should continually seek what is important to our Father. Why He and His Son gave everything so that we could be His. It begins with “reading” what He wrote on our heart. And we can find that easily enough in the bestselling book, the Bible. Really. And by the way, the whole Bible — Genesis to Revelation. Find out more about God’s gracious gift!