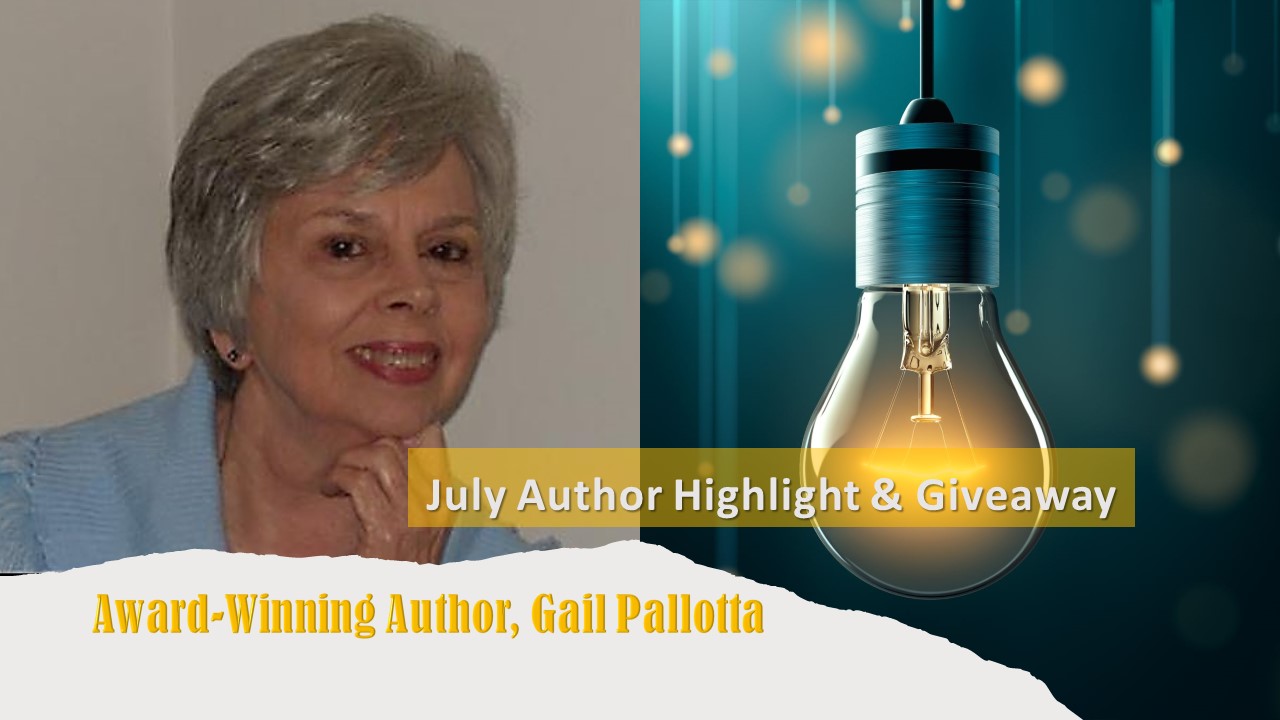 Remember the old adage, “You can’t judge a book by its cover?” well, I had no idea this month’s featured author, Gail Pallotta was such a funny writer! Her contemporary novels make me laugh, and her suspense stories keep me turning those pages! Gail is a tiny little powerhouse of creativity, and I can’t wait for you to get to know her.

Here’s what Gail says about herself:

Gail Pallotta’s a wife, Mom, swimmer and bargain shopper who loves God, beach sunsets and getting together with friends and family. A 2013 Grace Awards finalist, she’s a Reader’s Favorite 2017 Book Award winner and a TopShelf 2020 Book Awards Finalist in their Fiction—Comedy, Humor Category. She’s published six books, poems, short stories and several hundred articles. Some of her articles appear in anthologies while two are in museums.

Ready to get to know Gail even better? Here we go! Gail, what was your inspiration for writing in general—why did you choose writing?

I think writing chose me. As a youngster I wrote stories, but even at the time I entered college, it never occurred to me to share them. Still, writing fiction and poems was as much a part of my life as breathing or eating. I just did it. When the college I attended started a professional writing class, I enrolled and learned I probably could make a living working on a newspaper or a magazine. Even though it wasn’t fiction, my first choice for writing, I aimed for something in those fields as a profession because they involved writing. I ended up in a public relations department working with a retired AP guy on the company newspaper and magazine, but I still wrote stories and poetry on the side. Eventually I joined American Christian Fiction Writers (ACFW) and learned more about the world of writing and publishing books.

And, that is where we met. Did you read as a child?

Like most youngsters who love mystery, I read Nancy Drew books, but I also grew up in a family who loved books. Before I learned to read my mother read The Wizard of Oz and Robert Louis Stevenson’s A Garden of Verses to me. Even after I learned to read, my father read Aesop’s Fables to me if I was ill. I especially remember hearing them through the measles and mumps. My grandmother enrolled me in a book club consisting of Zane Grey novels. I read the classics, such as Treasure Island, Jane Eyre, Pride and Prejudice and Anne of Green Gables. I also read the Bible and a devotional book given to me by our church.

Wonderful! What did you read to your daughter?

I read Bible stories and the Little Golden Books to my daughter before she could read. One book passed down from my cousin stood out to me, and I read it over and over to my daughter. It is How Joe the Bear and Sam the Mouse Got Together. I loved it because the bear and the mouse are obviously very different, but they want to be friends. They don’t see how they possibly can until they discover they both like ice cream and can eat it together. I loved the message that we all have something in common, a thread that binds us, if we make the effort to discover what it is.

What a great message — especially for today! Do you have any strange writing habits/quirks?

Two come to mind. As with many writers, it’s difficult to wedge writing in between preparing meals, washing clothes and just taking care of life. One of my goals is to find the time to write, and when I do, it’s so ironic. I procrastinate. I go check my email, peek at Facebook, or catch up on the news before I start, but I think that’s my way of clearing my head, even though it seems awfully strange to work toward the time to sit down and write and then procrastinate. Also, sometimes when I can’t get a sentence or a paragraph to say when I want and I’ve worked on it a while, I have to stop. Usually, I get up and grab something to nibble or drink.

Ha-ha! I totally identify with that! I call it chasing butterflies! Which of your books stretched you the most as a writer?

Barely Above Water. While I research part of every book I write, this book required an enormous amount of research into the field of alternative medicine, which is somewhat controversial and the book focused on chronic Lyme disease, which is also controversial. Since I have Lyme disease, I was familiar with the symptoms and alternative therapies, but it was difficult describing them and choosing which ones to include.

I had help from my wonderful alternative doctor and an MD who sometimes works with him, so that was a blessing. I couldn’t have done it without them. Also, the entire time I worked on the book I wondered if anyone would consider publishing a controversial subject.

At a writer’s conference I once heard, “Don’t tell me God told you to write a book, because I’ll tell you He didn’t tell me to publish it.” Whew! I’ve never said that. However, as people learned about my malady along with the fact that I lead a fairly active life, I received phone calls and emails from people who either had Lyme disease, or knew someone who did.

Since finding treatment for the ailment was quite difficult at that time, most who contacted me asked about mine. I truly felt called to write this book and did it while stumbling around in the dark about what might ever happen to it. I had wonderful encouragement from Lisa Lickel, my writing partner then, and as the Lord willed it, the first place I sent it accepted it. That was Joan Bauer Alley at Prism Book Group. It was later picked up by Pelican Book Group. I’m grateful to both of them as well as Lisa.

I read that book. I learned so much and the story was so sweet.

This month’s Book Review was Cooking up a Mystery. Here’s the brief synopsis:

Laney Eskridge worked to put her husband through dental school. Then he left with another woman. She’s on edge from the emotional scars and her parents’ deaths. Then she hears unexplained noises in her new tea house, and her anxiety is tripled. Add a budding romance with Eric—a guy with a fear of commitment—and it’s all too much to handle. She cuts ties with Eric and plunges into making her business pay off.

When Eric discovers that Laney’s in danger, he vows to protect her. But can he make a lasting promise? Will she trust him? . . .and when they overhear a threat that could cause national turmoil, will anyone believe them? There’s more brewing than herbal tea in Cooking up a Mystery.

What is the story behind Cooking up a Mystery?

I wanted to write books about women entrepreneurs and show how their faith helps them. I chose the food industry for Laney, someone succeeding against the odds, because I have lots of cooking experience. I learned the skill at age ten. The reason, according to my father—I’d know how when I got married. I didn’t marry until I was thirty. By then, I’d received lots of instruction, so I knew how to prepare some pretty good dinners. After I married, my husband said, “You could start a restaurant.” I wanted to do other things instead, such as write, but I started one in this book.

A section in the back of Cooking up a Mystery, Laney’s Chefs in the Making, features over two dozen recipes. Only Laney’s Pineapple Rice is mine. The rest are from a book, Heavenly Delights, authored by my friend, Pam Nichols Griffin, as a fundraiser for Mission Love Seeds, a charity that helps children throughout the world and responds locally after disasters to demonstrate God’s love. Pam, who’s an editor at The Destin Log in Destin, Florida, and I had discussed working on a project together sometime, and this seemed the perfect opportunity.

What is one of your favorite quotes from Cooking up a Mystery and why do you love it?

It’s hard to choose just one, but I selected the following:

“I have to do everything I can to save the tea house. If you lose it and you aren’t happy, I’ll have an empty spot in my life nothing can fill.”

I like this one because it sums up a characteristic of true love. If you really love someone, and that person isn’t happy, you aren’t either.

What a great quote! A friend who once asked me, “What is important to you? What is so passionate about that you cry out and pound your fist on the table? What is your pound-on-the-table passion?

Saving Christianity. People have tried to erase Christianity from our country for a long time. I first noticed it in the 1960’s, when I read the headline, “God Is Dead.” The efforts of those who want to destroy the Christian faith have been pretty intense and continuous since then. Defending my beliefs and the right to voice them is my pound-on-the-table passion.

That is a GREAT passion! I think as inspirational writers, we can all pound the table for that! What do you hope your readers know about you and your books?

I want to write books that are fun to read and have uplifting Christian messages.

I think you have definitely done that! Do you have a recipe that compliments your book’s characters, setting, or time period? Please share.

Rice (can be instant, but not boil-in-the-bag)–Make enough for your family (4-6)

Cook rice according to directions on the box, but substitute a couple tablespoons to 1/4 cup pineapple juice (depending on taste) for part of the water.

Coat a heavy bottom skillet with oil. Add the onion, garlic, ginger, pineapple and sugar and stir. Add cold rice, break up, squirt with the juice of one lime and stir until heated and blended.

I’d like to thank you for having me and thank my readers. I’m grateful for my friends and supporters.

Gail has graciously offered a great giveaway for this month’s winner! An autographed copy of Cooking Up a Mystery. To enter, post a comment below about the interview. On Friday, July 16th, one entry will be randomly selected.

And if you haven’t already, I hope you’ll subscribe to my monthly newsletter below — I have two special surprises for you. And, you’ll have another entry into the giveaway!

One Winner! And it could be you! Be sure to tell your friends and family to come on by and enter! Drawing takes place on Friday, July 16th!

NOTE: WANT TO INCREASE YOUR CHANCES OF WINNING THIS INCREDIBLE PRIZE PACKAGE?

Check out my YouTube Author Highlight interview with Gail. In the video interview she will answer different questions, and provide some fun insights. By Liking and Commenting you will have one more entry. Sharing the video, another entry. Subscribe, and you have TWO entries for the chance to win.

Be sure to tell your friends! See you there!

Thanks so much for stopping by. I hope you enjoyed getting to know my friend Carrie Turansky and her books. Next month’s Author Highlight is award-winning author, Laurel Blount. God Bless and Keep Reading!