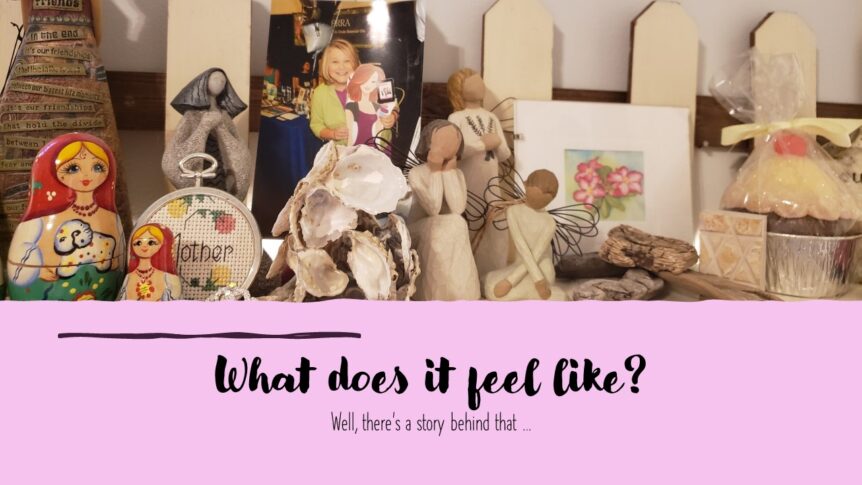 “What does it feel like to see your book cover for the first time?” 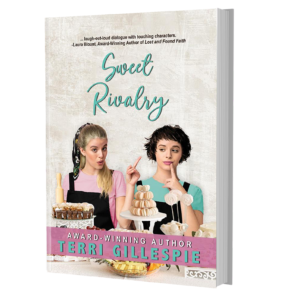 That’s a question I’ve been asked since Sweet Rivalry‘s cover reveal this week. What does it feel like to see my book cover for the first time?

Before I answer that question, I intend to break a cardinal rule in writing — give backstory first.

The photo above is my chatchkes shelf (a.k.a. knick-knacks) that’s above my desk. Each seemingly random item holds special meaning: a cross-stitch my daughter made, driftwood from Israel, little figurines from my late-sister, a watercolor from Jamaica — all reminders of moments or inspirations.

Tucked in the corner is another special treasure. See it? A cupcake. It’s not really a cupcake — it’s a candle.

About ten years ago, my friend Cathy presented the candle to me because I had told her about an idea for a story. Really, it was barely a concept: twin sisters separated. One had a good life, the other a horrible life. They both loved to bake.

The working title was something like Cupcake Sisters or Cupcake Wars. Not much there, but how exciting for the first spark of creativity to light my imagination.

Well, Cathy thought the idea was worth pursuing. Hence the little gift — a bit of inspiration.

A few years later, the vibrant wax colors began to fade. So did the story. The candle no longer appeared lifelike, neither did the possibility of a story coming to life from a few random ideas.

Over the years, the candle was never far from my sight, but the twin sisters with different pasts seemed as hopeless as restoring the colors to that cupcake. Life detoured my pursuits of writing. In fact, life seemed to smother what little spark I had left for writing.

In 2019, Cathy came for a visit. She didn’t like that the friend she’d known for so long, had faded just as that candle. Where was my creativity? Passion? Joy? Why wasn’t I writing?

After several rough starts, I pulled that cupcake candle from its shelf and set it in front of me. A year later, a rough draft of the re-titled, Sweet Rivalry was born.

Any author will tell you the really difficult work comes after the draft, but I didn’t care. The candle may have faded, but not the dream.

That molded piece of wax represented more than a story idea, it represented a friend’s belief that the story was worth pursuing. She believed in me and that writing was a gift from God.

So, how does it feel to see the cover, and even more importantly, to know the story of two sisters will be read by others? It is … AWESOME!

And maybe, it’s time to celebrate and light the candle.