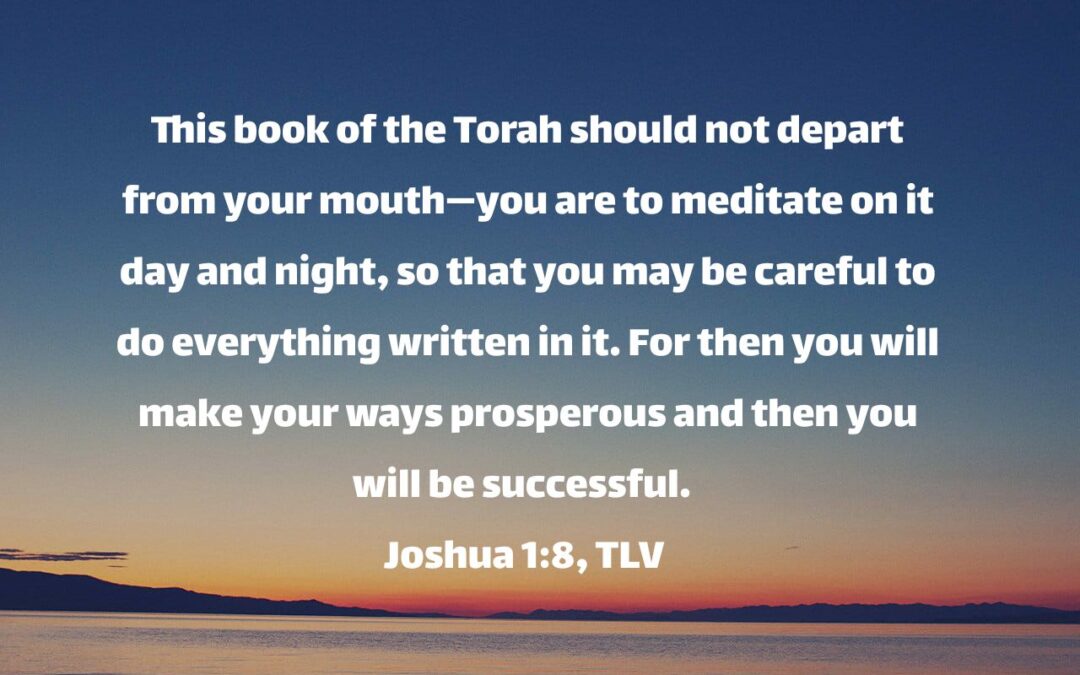 This book of the Torah should not depart from your mouth—you are to meditate on it day and night, so that you may be careful to do everything written in it. For then you will make your ways prosperous and then you will be successful. Joshua 1:8, TLV

Context. On the heels of thirty days of mourning the death of Moses (Deuteronomy 34:8), Joshua and the Children of Israel are preparing to enter the Promised Land. It must have been a bit unsettling to have new leadership for such a momentous occasion, especially someone who wasn’t the great Moses. But, Joshua was not just a warrior, he was a loyal and Godly man.

I have always admired Joshua as a leader. That admiration began with this passage:

When all the people saw the pillar of cloud standing at the entrance of the Tent, they all rose up and worshipped, every man at the entrance of his own tent. So Adonai spoke with Moses face to face, as a man speaks with his friend. Then he would return to the camp, but his servant Joshua, the son of Nun, a young man, did not leave the Tent. Exodus 33:10-11, TLV [Emphasis Mine]

Did you see that? Moses left the Tabernacle, but Joshua remained. Was he soaking in the residual presence of God? Worshipping? The fact that Joshua was still alive spoke to the favor he had with God. I’ve wondered what went on in those quiet moments. Another question to ask in heaven . . .

Before Joshua assumed the role of leader, he was in training. Not consciously to take over for Moses, but to be a worthy helper to Moses. No doubt, that was why the LORD chose him to replace Moses.

I don’t think Joshua sought to take over for Moses. He probably thought Moses would lead them all into the Promised Land. Nevertheless, as a soldier, he would follow orders and do as he was commanded.

What is our takeaway from today’s verse? Of course, the merits of study and living God’s word, because we’re commanded to and because we’re created to operate most successfully within its borders. But I’d love for us to meditate on the attributes of Joshua. Find those that we can emulate and ask the Holy Spirit to show us how.

Perhaps we can begin by remaining in the Tent a bit longer . . .